Included will be a limited editiona rug to pay respect this wonderful horse who sadly passed away at the age of 28. He attended 17 Breyerfests and I myself was very lucky to meet him and have my portriat model signed by his owner. 'Ricky' also nuzzled my model during the photograph, a memory I will never forget.

Appaloosas are noted for their unique spotted coats and Lil' Ricky Rocker doesn't disappoint! The flashy 1992 leopard Appaloosa gelding made his show debut at age 3, but then colicked and was given little chance of survival. Not only did Ricky pull through, he came back the next year to become the Reserve World Champion in Junior Reining!

Owned by Ron and Donna Georgyi of Ohio, Ricky had success is many different classes, including earning several National and World Championships in Appaloosa Heritage. In this exciting class, stages of the breed's rich history are portrayed with the horse and rider costumed to represent anything from Native Americans to Spanish conquistadors! The horse and rider are judged on the authenticity of their attire and equipment, markings of the horse, written description, and a 60-second oral presentation. Ron and Ricky show in the attire of a Plains Indian from the 1850-1870's, which is all realistically crafted in the same materials that would've been used at that time.

On top of his showing accomplishments, Ricky also held an important job at BreyerFest: Being the trusted mount of Breyer's own Stephanie Macejko during the opening ceremonies! Ricky adores people and attention, so he was right at home in the spotlight!

The rug is entirely hand made with a hand embroidered font of Lil’ Ricky Rocker on one side and Champion Appaloosa on the other. Featuring the embroidered Hot to Trot Model Horses logo badge too. He has 17 stars representing his attendance at 17 Breyerfests!

It also features a belly band which is velcroed out of sight so as not to break up the red, white and blue striped ribbon adorning the bottom of the rug.

These are Limited Edition and come together with Li’ Ricky at a price of £39.95

This rug features small parts so it not suitable for small children.

I was lucky enough to meet Lil’ Ricky in person and it has been my pleasure to produce these rugs in his honour. 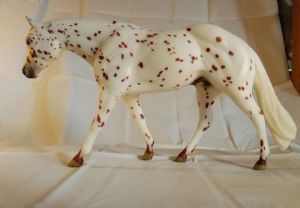